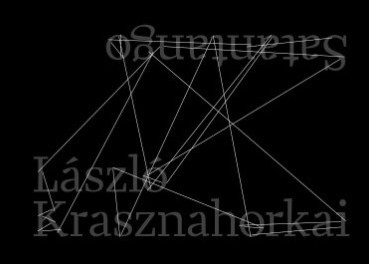 So many books, so many books. I consciously tried to expand my reading horizons this year, which has helped to swell my reading list to unmanageable lengths.  Sifting out worthy entries in disciplines with which I’m not especially familiar is not at all easy, so sometimes I just have to go on faith that apparent hard work, diligence, and care have resulted in an enlightening end product.

Krasznahorkai’s Satantango is certainly for me the book of the year, though in its way Lucan’s Civil War was as well, and I was very happy to have William Bronk‘s later poetry collected.

I have hardly read all of all of the nonfiction selections–I’ll be lucky if I ever read the Bailyn book cover to cover–but they have all been of note to me at least as reference or inspiration. Some stragglers from 2011 have snuck in as well.

If anyone’s curious as to why some book or other made the list, feel free to ask in the comments. Reviews on a couple are forthcoming.

(As always, I do not make any money from these links–this was just by far the simplest way to get thumbnails and metadata.)

The Holocaust as Culture

The Museum of Abandoned Secrets

Ralph Azham: "Why Would You Lie To Someone You Love?"

The Making of Romantic Love: Longing and Sexuality in Europe, South Asia, and Japan, 900-1200 CE (Chicago Studies in Practices of Meaning)

Essays in Ancient and Modern Historiography

Memory: Fragments of a Modern History

The Lucretian Renaissance: Philology and the Afterlife of Tradition

Regimens of the Mind: Boyle, Locke, and the Early Modern Cultura Animi Tradition

German Philosophy of Language: From Schlegel to Hegel and beyond

Fictions of the Cosmos: Science and Literature in the Seventeenth Century

American Nietzsche: A History of an Icon and His Ideas

The Age of Insight: The Quest to Understand the Unconscious in Art, Mind, and Brain, from Vienna 1900 to the Present

Moral Origins: The Evolution of Virtue, Altruism, and Shame

The Creation of Inequality: How Our Prehistoric Ancestors Set the Stage for Monarchy, Slavery, and Empire

More than Real: A History of the Imagination in South India

The Twenty-Five Years of Philosophy: A Systematic Reconstruction

Scholarship, Commerce, Religion: The Learned Book in the Age of Confessions, 1560–1630

The Hermeneutic Nature of Analytic Philosophy: A Study of Ernst Tugendhat

Power, Inc.: The Epic Rivalry Between Big Business and Government- and the Reckoning That Lies Ahead

Through the Eye of a Needle: Wealth, the Fall of Rome, and the Making of Christianity in the West, 350-550 AD

On Politics: A History of Political Thought: From Herodotus to the Present (2 Vol. Set)

Governing the World: The History of an Idea

The Barbarous Years: The Peopling of British North America: The Conflict of Civilizations, 1600-1675

Kant's Critique of Pure Reason: An Introduction and Interpretation (This Way Up series)