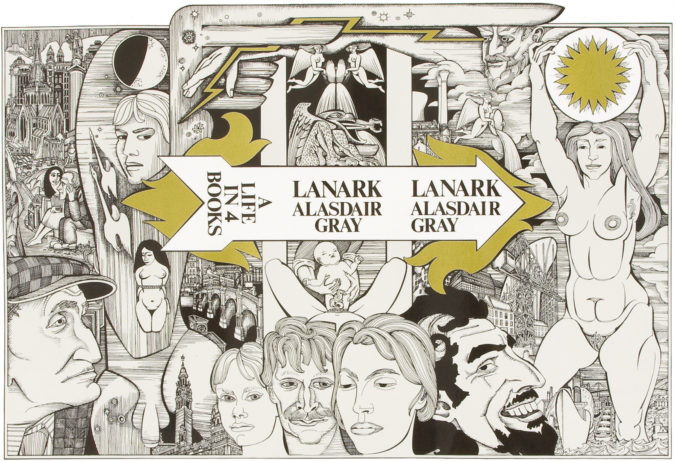 I read Lanark as a very young adult and, like many others, was marked by its naked emotion, honesty, and despair. Gray’s death at the end of last year, after a long and successful career as an artist and writer, struck me hard. As a celebration of his life and work, I am posting an essay written for an anthology on Gray’s artwork which never materialized, on the sources of the frontispieces for Lanark’s four books and the uses to which Gray put them.

Revisiting Lanark at twice the age I was when I originally read it, I can step back from my heart and better see how intricately Alasdair Gray had crafted the inhuman machinery into which Duncan Thaw and Lanark fall. Coded with symbolic meaning, the four prints constitute Lanark’s most forceful allusions to modern history—and deliver Gray’s rejoinders to that history.

In A Life in Pictures, Gray says that his sources for the four frontispieces of Lanark were four postcards sold in the shop of the British Museum (whose London Reading Room, Gray notes, is “The great circular chamber where Marx, Bernard Shaw and Lenin had educated themselves”).

The four works, their fields, and the subject matter which Gray assigns to them, are as follows:

All four works date from the dawn of modern science and technology. Gray subverts the proclaimed intentions of each, deflating the optimism and conceits of history’s great men and turning instead to the human costs of their ambitions.

Like Lanark itself, Gray’s four prints tell the story of human life and love crushed and consumed by the machinery of the state, which I will call the Leviathan (“Hobbes’ demonic metaphor,” in Gray’s words) for short.

While Lanark is presented out of order, Book 3 coming before all others, the frontispieces are most clearly explained in the numerical sequence, so I begin with Book 1.

Gray’s alterations to Simon van der Passe’s frontispiece to Francis Bacon’s Novum Organum are the most radical, inverting Bacon’s optimistic cry for science into a looming apocalypse. Bacon’s book mounted a rejection of Aristotelian dogma as well as what Bacon termed the “Four Idols” confounding human thought, so that knowledge and science could expand without limits. As Elizabeth Eisenstein writes in Divine Art, Infernal Machine, “The title page shows a ship sailing outside old limits (the pillars of Hercules, which enclosed the inhabited world of antiquity) into the vast unknown, on a voyage without end.” In Gray’s version, what lies beyond is simply the Leviathan, depicted in two forms: Hobbes’ enormous, sword-bearing sovereign, and the white whale advancing on the ship.

In place of the Latin inscription, “Many will travel and knowledge will be increased,” Gray uses a variant on Saint Mungo’s saying (and Glasgow’s motto), “Let Glasgow flourish by the preaching of the word”: “Let Glasgow flourish by telling the truth.” The truth is not Bacon’s bright skies and open seas, but darkness. The waters form a deluge onto Glasgow. The skies are pitch black rather than clear, the waters choppy rather than calm, and a piercing bolt issues from the Leviathan’s mouth toward the ship and Glasgow. The water deluges the city of Glasgow, witnessed by the faces of Thaw, his mother, and his sister.

Bacon’s truth is only the truth of the oracle, the objective, scientific, and inhuman narrator introduced in the Prologue immediately preceding Book 1. Gray instead seeks a personal and human truth. Past the pillars is the truth of this book, which begins in Glasgow and will end in the Leviathan of Book 4. That Leviathan will flood and crush Glasgow, just as it destroys Thaw in Book 2. Thaw’s journey, and the journey of his city, is not just perilous, but doomed.

Book 2: The Fabric of the Human Body

Gray’s appropriation of the title page of Vesalius’ revolutionary work of human anatomy is far more faithful. (The attribution to Giuseppe Porta del Salviati is doubtful, with some attributing it to Titian.) Thaw himself studies morbid anatomy in Book 2, but Gray alters the corpse to be male rather than female, an indication that the corpse is meant to symbolize Thaw’s own body, which torments him for so much of Book 2.

The medical establishment dissects Thaw’s body just as the educational system dissects his mind. The second book is the story of Thaw’s hellbent attempt to discover and mobilize in himself that which is inaccessible by those dissections. Under anatomy, Thaw observes, “What was felt as tastes, caresses, dreams and thoughts could be seen as a cleverly articulated mass of garbage.”

In Shades of Gray, Dietmar Böhnke observes that the original copyright notice has been replaced a Latin rendition of Noakes’ statement from the end of Book 3: “Man is the pie that bakes and eats himself and the recipe is separation.” In joining Books 2 and 3 together, this title page also links the dissection of Thaw to the consumption of diseased bodies en masse by the Leviathan in the final two books.

Book 3: The History of the World

Walter Raleigh’s History of the World helped contribute to its author’s demise (partly, as Gray points out in The Book of Prefaces, at Francis Bacon’s hand), after King James suppressed it for “being too saucy in censuring Princes.” Gray’s variation brings out this irony by turning “grave History” herself, the central figure of the image, from a beatific teacher (“Magistra Vitae,” [Life’s teacher], after Cicero) into a proud warrior. This teacher is a conqueror rather than an educator, standing atop figures of death and oblivion, less her predecessors than her victims. (Gray makes the arrow that felled them far more prominent.)

History’s drapery obscures one engraving only present in Elstrack’s original: “Nuncia vetustate” [herald of antiquity]. Gray’s History is not a messenger from the past; Lanark arrives in Unthank with no memory whatsoever. Rather, History is the force that gives birth to the Leviathan itself and the capitalist “creature” that fuels it.

The title page of Book 4 joins it with Book 1, otherwise its most distant relative. The Leviathan that loomed in the background of Book 1’s frontispiece is now front and center, having assumed its place as the form of a society divided against itself.

Gray’s comparatively subtle variations on Abraham Bosse’s seminal portrait of the Leviathan, Hobbes’ draconian but necessary mechanism for the survival of human society, are his most complex and ingenious. The land is not a countryside town but what appears to be the Scottish mainland and isles, industrialized and modern.

The Leviathan’s sword and crozier, representing the civil and ecclesiastical aspects of the state respectively, have been labeled FORCE and PERSUASION–in case there was any doubt as to the roles they play. The esteemed instruments of the state are portrayed by Gray as tools of oppression and conformity: police, law, army, education, and (in place of the church) the factory. Beneath the sword, the billy club replaces the castle. Beneath the crozier of persuasion, religious institutions are replaced by schools and factories, suggesting they have taken the place of dogma as suppressive mechanisms.

The result is the apocalypse of Book 4. “Since the institute [science] joined with the council [government] it seems that half the continents are feeding on the other half.” “The efficient half eats the less efficient half and grows stronger.”

The original frontispiece quotes (in Latin) the God of Job describing the mythical Leviathan: “There is no power on earth to be compared to him.” Gray substitutes a paraphrase of a different line from Job, joining it (in one version of the print) with a paraphrase from Hobbes’ introduction:

By art is created that great Leviathan called a Commonwealth or State (in Latin, Civitas), which is but an artificial man.

“He is a king over all the children of pride.”

[By arts is formed that great mechanical man called a state,] Foremost of the beasts of the Earth for pride.

Whereas in the original, the citizens within the Leviathan looked up toward the head that ruled them, here they face every which way, divided against themselves. A hatted upper class, facing outward, points fingers at the lower classes beneath them. The military marches out of the right arm toward the sword; the laity pray and preachers orate on the left arm. And the ruler’s eyes are shut: “Leaders need to be mostly dead,” Lanark observes. “People want solid monuments to cling to, not confused men like themselves.”

Gray revises Hobbes’ conception of the unified state to illustrate how that unity is obtained. The state is a body at war with itself, much as Thaw’s body is at war with itself (asthma, acute allergies, and skin diseases) and the entire population of Unthank is afflicted with diseases that destine them to be ultimately processed by the Institute for food. The loveless, proud Leviathan poisons itself and expires.

Taken together, the four prints underscore the oft-disputed unity of Lanark, as well as the sheer will of Gray’s effort to portray the individual’s capabilities for art and love against the backdrop of the modern industrialized state. The two bodies of Lanark, Thaw/Lanark’s human form and the Leviathan’s political unity, are both at war with themselves, but only the first has (on occasion) the capacity for love.

In our presently wretched world, I reread the climax of Lanark, in which Lanark momentarily declares himself content as his son climbs a hill on a clear day. I read it outdoors as my daughter played in a park field around me. Gray’s truth still resonates.

David Auerbach’s Books of the Year 2019

Books of the Moment