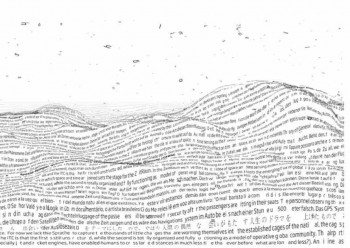 The main reason why I pursued philosophy alongside literature was my increasing certainty that the closer I looked at words and sentences, the less idea I had of what they meant. The apparent correspondence between my thoughts, our language, and the world fell apart as I matured, in much the same way that Kafka described in Diogenes:

Where A is thought and mind, B is language, and C is the world, including our physical selves. It would be so much simpler if there were only two pieces to the puzzle and we could measure one against the other, but since each is a medium onto the other two, stability seems absurdly out of reach.

Yet analytic philosophy was disappointing in that the grave problems of correspondence between language, mind, and reality had given way in the 80s and 90s to a neo-Aristotelian essentialism, which once again wished to see language as a transparent window onto the world. Its counterpart in poststructuralism was equally disappointing, positing that meaning was endlessly deferred or wholly constructed, something which was rather evidently not the case. The world has some pull on language, though that pull is slippery, non-atomic, and ever-shifting.

And at the center of it (or perhaps the bottom of it) lies that big notion of truth. There are so many hazy concept around today that I hesitate to single out any one as being overridingly problematic, but of all the concepts that people simultaneously trumpet and denigrate, while not even being aware of the contradiction, truth must rank damn close to the top.

People claiming to do away with truth produce more heat than light, frequently falling into absolutist claims that would embarrass the targets of their attacks. Meanwhile, attempts to account for truth in logic and positivism have yielded poor results: special cases in which a method for knowing truth is somewhat more available than usual.

Attacks on scientism are really just attacks on the claim of special access to truth that that has been made by every dominant methodology, from animism to shamanism to alchemy, since the beginning of time. If science today provides the clothes with which educated people dress up would-be truths, that says nothing more about the worth of science than it said about alchemy. Other considerations factor into those assessments. But truth requires some methodology in order for us to see it as truth, and so you get what Polanyi calls “dynamo-objective coupling”:

These supposedly scientific assertions are, of course, accepted only because they satisfy certain moral passions. We have here a self-confirmatory reverberation between the theory of bourgeois ideologies and the concealed motives which underlie it. This is the characteristic structure of what I shall call a dynamo-objective coupling. Alleged scientific assertions, which are accepted as such because they satisfy moral passions, will excite these passions further, and thus lend increased convincing power to the scientific affirmations in question—and so on, indefinitely. Moreover, such a dynamo-objective coupling is also potent in its own defence. Any criticism of its scientific part is rebutted by the moral passions behind it, while any moral objections to it are coldly brushed aside by invoking the inexorable verdict of its scientific findings. Each of the two components, the dynamic and the objective, takes it in turn to draw attention away from the other when it is under attack.

Polanyi was referring to Marxism but the sentiment applies just as easily to the rhetoric of countless other ideologies, Ayn Rand being one crude example. And “science” can just as easily be swapped out for the previous justificatory methodology of your choice. And that makes the problem that much worse since the methodology now remains under question itself.

Now, science works and alchemy (or augury, or poetry) does not. But when reduced to its seemingly essential components, science does not yield anything so lofty to be called truth, at least not in the sense of a human truth graspable by anyone meeting the basic criterion of being human. Robert Musil phrased the disappointment like this:

It is hard to say why engineers don’t quite live up to this Vision. Why, for instance, do they so often wear a watch chain slung on a steep, lopsided curve from the vest pocket to a button higher up, or across the stomach in one high and two low loops, as if it were a metrical foot in a poem? Why do they favor tiepins topped with stag’s teeth or tiny horseshoes? Why do they wear suits constructed like the early stages of the automobile? And why, finally, do they never speak of anything but their profession, or if they do speak of something else, why do they have that peculiar, stiff, remote, superficial manner that never goes deeper inside than the epiglottis? Of course this is not true of all of them, far from it, but it is true of many, and it was true of all those Ulrich met the first time he went to work in a factory office, and it was true of those he met the second time. They all turned out to be men firmly tied to their drawing boards, who loved their profession and were wonderfully efficient at it. But any suggestion that they might apply their daring ideas to themselves instead of to their machines would have taken them aback, much as if they had been asked to use a hammer for the unnatural purpose of killing a man.

But one thing, on the other hand, could safely be said about Ulrich: he loved mathematics because of the kind of people who could not endure it. He was in love with science not so much on scientific as on human grounds. He saw that in all the problems that come within its orbit, science thinks differently from the laity. If we translate “scientific outlook” into “view of life,” “hypothesis” into “attempt,” and “truth” into “action,” then there would be no notable scientist or mathematician whose life’s work, in courage and revolutionary impact, did not far outmatch the greatest deeds in history. The man has not yet been born who could say to his followers: “You may steal, kill, fornicate–our teaching is so strong that it will transform the cesspool of your sins into clear, sparkling mountain streams.” But in science it happens every few years that something till then held to be in error suddenly revolutionizes the field, or that some dim and disdained idea becomes the ruler of a new realm of thought. Such events are not merely upheavals but lead us upward like a Jacob’s ladder. The life of science is as strong and carefree and glorious as a fairy tale.

Robert Musil, The Man Without Qualities

In its most distilled form, science (and especially mathematics) provides a certain temptation toward pristine and unvarnished truth that I have never experienced anywhere else–unfortunately, some have taken this to mean that science provides the complete vision of what truth can be and so we’d better get used to it. At least in its present form, science does not do that, because I have had enough glimpses of it through other methodologies to know that science, at least in its common naive sense, is not sufficient.

The better answer, at least from those who see what a mess science is and has always been, is that “science” is a broad enough methodology to encompass these other methodologies as well, if the criteria of science are restricted to what seem to be its core essentials: fallibilism, skepticism, and provisionality. (You could say humility and modesty, except that these traits are often applied without much of either.) More and more I see these traits in most of my favorite literary authors, and I also see their absence in a great many writers I disdain.

Here is a scientist speaking of how little we are privileged to know, something you would never guess at were you to find yourself reading Henry Miller, Max Stirner, or Christopher Hitchens:

We walk through the world as the spectator walks through a great factory: he does not see the details of machines and working operations, or the comprehensive connections between the different departments which determine the working processes on a large scale. We do not see the things, not even the concreta, as they are but in a distorted form; we see a substitute world–not the world as it is, objectively speaking.

Reichenbach’s statement at the beginning is not just about science, but about our observation and study of anything. We are tearing our way through thick layers of the gauze of preconceived notions and biases instilled in us by seemingly every single damn thing in the universe. We won’t pass the final layer (probably not ever, though hope springs eternal I suppose), so the myriad disguised claims of truth that constantly shriek and harangue us would do better to come clean and be exposed for the false promises they are. Our tub is full of ghosts.

This is what I’ve learned in my years (today is my birthday). The more I’ve held to this sort of a systematic, coherent system of fallibilism in every aspect of my life, particularly with regard to myself and my beliefs, the better off I have been.