Childhood, says the Children’s Encyclopaedia, is a time of innocent joy, to be spent in the meadows amid buttercups and bunny-rabbits or at the hearthside absorbed in a storybook. It is a vision of childhood utterly alien to him. Nothing he experiences in Worcester, at home or at school, leads him to think that childhood is anything but a time of gritting the teeth and enduring. 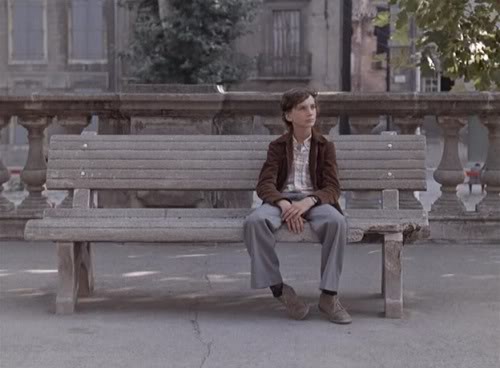 There have been many movies portraying various childhood hells with different degrees of sentimentality and relief, but I can’t think of one that competes with Jean Eustache’s Mes petites amoureuses in portraying childhood as so sheerly joyless, so gray and unappealing. The world is not as brutal to Daniel, its young teen protagonist, as it is to anyone in a Dardenne film or Francois in Maurice Pialat’s L’Enfance Nue, nor is Daniel a delinquent on the order of Francois. But nor does Daniel experience much of the momentary fun that those characters get. So the movie is of a piece with Eustache’s earlier work, The Mother and the Whore, in its portrayal of the denial of pleasure in what for most people might be called the pursuit of happiness. Not torment, just jadedness.

Daniel leaves the countryside to move in with his mother and her rather lame lover. They treat him with indifference and contempt, though not quite outright abuse. He hangs out with locals, eventually learns how to pick up girls, gets a lousy job at a bike shop where he watches his employer rip off the customers. He provides suitably numbed voiceovers to some of his experiences, flatly detailing his feelings (“I was scared”). In contrast to Jean-Pierre Leaud’s charisma in The Mother and the Whore, the actor playing Daniel is reticent and a bit stiff; you can’t really get close to him, not that anyone in the movie ever tries. His most animated moments are when he is learning to pretend, as when simulating a circus sword-swallower’s act by lying on (carefully placed) broken glass, or when he is feeling up a girl in the movie theater by dutifully imitating a boy a few rows down.

There is one exceptional moment, and I don’t know whether to call it a slip on Eustache’s part or the final nail in the coffin of Daniel’s dreams. Daniel speaks to the only student he knows, in one single close-up, in his only extended monologue in the whole movie:

DANIEL: I read a book about this guy’s high school years. He said his French professor really made him sick when he lectured about passion in the works of Racine and Corneille. He said the same things year after year. Finally the words had no sense, no heart. That professor had no business talking about passion. He knew the plays inside-out, but he’d never lived them. Whereas the student felt he would live those passions later on…. Any opinion?

STUDENT: That you run off at the mouth. Coming to the cafe?

And that’s that. He goes off with some boys to make out with girls and gives up on school. When a girl says she can’t sleep with a boy until they get married, he thinks, “It seemed to me I’d heard it all, that I knew the whole thing by heart.” Eustache committed suicide seven years after this film.