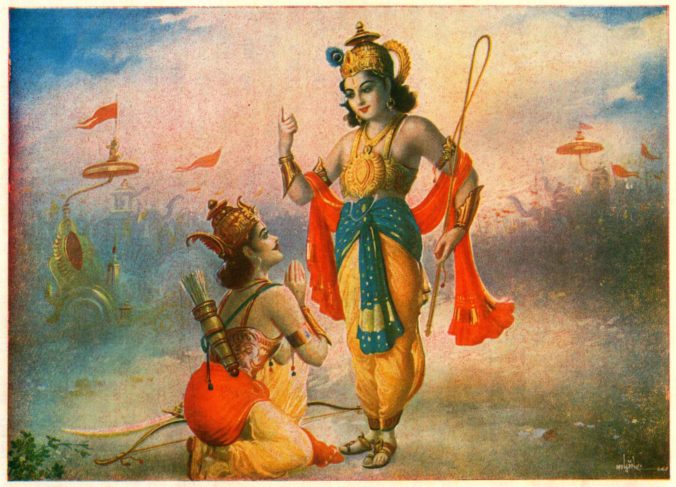 Now I am become Death, the destroyer of worlds

Colin Marshall recently wrote a brief retrospective on Oppenheimer, the bomb, and the quote, which is Oppenheimer’s own translation from the Sanskrit. As with any religious text, the meaning of this passage is highly disputed, and so without commentary, here are two dozen or so translations (at least 273 English translations exist) of this famous passage at Bhagavad Gita 11.32.

I have intentionally interspersed sacred and secular translators, popular and academic translators, American, British, and Indian translators, and translators with wildly differing interpretations. The only ordering applied is chronology.

The most notable dispute is whether Krishna is Death or Time (or, occasionally, the Destroyer, and in one case, Doom). By overwhelming majority, Time has won out.

Two good overviews of translations are available at sreenivasaro’s and Erenow.

CHARLES WILKINS (1785)
I am Time, the destroyer of mankind, matured, come hither to seize at once all these who stand before us. Except thyself not one of all these warriors, destined against us in these numerous ranks, shall live.

KASHINATH TRIMBAK TELANG (1882)
I am death, the destroyer of the worlds, fully developed, and I am now active about the overthrow of the worlds. Even without you, the warriors standing in the adverse hosts, shall all cease to be.

EDWIN ARNOLD (1885)
Thou seest Me as Time who kills,
Time who brings all to doom,
The Slayer Time, Ancient of Days, come hither to consume;
Excepting thee, of all these hosts of hostile chiefs arrayed,
There stands not one shall leave alive the battlefield!

W. DOUGLAS P. HILL (1928)
Doom am I, that causes worlds to perish, matured and here come forth to destroy the worlds; even apart from thee not one of the warriors drawn up in ranks opposing shall survive.

SHRI PUROHIT SWAMI (1935)
I have shown myself to thee as the Destroyer who lays waste the world and whose purpose is destruction. In spite of thy efforts, all these warriors gathered for battle shall not escape death.

SRI AUROBINDO (1938)
I am the Time-Spirit, destroyer of the world, arisen huge-statured for the destruction of the nations. Even without thee all these warriors shall be not, who are ranked in the opposing armies.

SRI SWAMI SIVANANDA (1942)
I am the mighty world-destroying Time, now engaged in destroying the worlds. Even without thee, none of the warriors arrayed in the hostile armies shall live.

SWAMI PRABHAVANANDA AND CHRISTOPHER ISHERWOOD (1944)
I am come as Time, the waster of the peoples,
Ready for that hour that ripens to their ruin.
All these hosts must die; strike, stay your hand—no matter.

FRANKLIN EDGERTON (1944)
I am Time (Death), cause of destruction of the worlds, matured
And set out to gather in the worlds here.
Even without thee (thy action), all shall cease to exist,
The warriors that are drawn up in the opposing ranks.

S. RADHAKRISHNAN (1948)
Time am I, world-destroying, grown mature, engaged here in subduing the world. Even without thee (thy action), all the warriors standing arrayed in the opposing armies shall cease to be.

R. C. ZAEHNER (1966)
Time am I, wreaker of the world’s destruction,
Matured,—[grimly] resolved here to swallow up the worlds.
Do what you will, all these warriors shall cease to be,
Drawn up [there] in their opposing ranks.

SRILA PRABHUPADA (1968)
Time I am, destroyer of the worlds, and I have come to engage all people. With the exception of you [the Pāṇḍavas], all the soldiers here on both sides will be slain.

KEES W. BOLLE (1979)
I am Time who destroys man’s world.
I am the time that is now ripe
To gather in the people here;
That is what I am doing.
Even without you,
All these warriors
Drawn up for battle
In opposing ranks
Will cease to exist.

J. A. B. VAN BUITENEN (1981)
I am Time grown old to destroy the world,
Embarked on the course of world annihilation:
Except for yourself none of these will survive
Of these warriors arrayed in opposite armies.

I am Time, the mighty cause of world destruction,
Who has come forth to annihilate the worlds.
Even without any action of yours, all these warriors
Who are arrayed in the opposing ranks, shall cease to exist

BARBARA MILLER (1986)
I am time grown old,
creating world destruction,
set in motion
to annihilate the worlds;
even without you,
all these warriors
arrayed in hostile ranks
will cease to exist.

W. J. JOHNSON (1994)
I am time run on, destroyer of the universe, risen here to annihilate worlds. Regardless of you, all these warriors, stationed in opposing ranks, shall cease to exist.

EKNATH EASWARAN (2000)
I am time, the destroyer of all; I have come to consume the world. Even without your participation, all the warriors gathered here will die.

STEPHEN MITCHELL (2002)
I am death, shatterer of worlds,
annihilating all things.
With or without you, these warriors
in their facing armies will die.

BIBEK DEBROY (2005)
I am the terrible destroyer of people. I am now about to destroy these people. Even without you, all the warriors in the opposing army formations will not exist.

LAURIE PATTON (2008)
I am time that has aged,
who makes the world perish.
I have come forth
to destroy the worlds.
Even without you,
these warriors
facing off against each other
will no longer exist.

GEORG AND BRENDA FEUERSTEIN (2011)
I am time, mighty wreaker of the world’s destruction, engaged here in annihilating the worlds. Except for you, all these warriors arrayed in the opposing armies shall not be [alive after this battle].

GAVIN FLOOD AND CHARLES MARTIN (2012)
I am almighty time, the world-destroying,
and to destroy these worlds I have arisen!
Those warriors arrayed in lines opposing
your men, even without you, will have perished!

AMIT MAJMUDAR (2018)
I am Time. I make worlds die.
I have come here to annihilate worlds.
All these warriors, stationed in opposing ranks:
Even without you, they will cease to be.

NICHOLAS SUTTON (2019)
I am all-powerful time that brings destruction to the world. My activity here is to put an end to these worlds. Even without you, none of these warriors assembled here in battle array will survive.

Books of the Moment