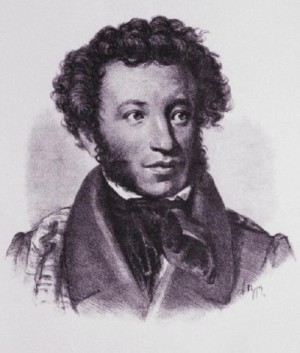 The Black Pushkin and The Blackamoor of Peter the Great

Alexander Pushkin was descended from Ibrahim Gannibal (1696-1781), a black page kidnapped and brought back from “Lagon” in Africa–possibly either in modern-day Cameroon or Ethiopia. Given as a gift to Peter the Great, the emperor became Ibrahim’s godfather and brought him up as a noble with education and responsibility. Ibrahim became a captain in the army, wrote on geometry and engineering, and was called “the dark star of the Enlightenment” by Voltaire.

Ibrahim was possibly Pushkin’s great-grandfather on both parents’ side, at least according to this essay. Pushkin’s black heritage seems a bit better-known than, say, George Herriman’s (and Pushkin was more open about it than Herriman), but it hasn’t sufficiently passed into common knowledge for Jonathan Gill, the author of Harlem: the 400 Year History, not to write that “J. A. Rogers saw everything through the lens of race, insisting that even Beethoven and Pushkin were black.”1

In 1827, Pushkin started a fictionalized romantic history of his ancestor, The Blackamoor of Peter the Great, dubbing Ibrahim “the son of a black sultan,” thus noble through and through. He abandoned it after about thirty pages, so what’s left is more or less just the setup for an ensuing drama that was never written. What got written, though, is fascinating. Ibrahim is a likable, suave, and thoughtful nobleman who goes to Paris for a time (culture! education!) before returning to St. Petersburg in the early 1720s. While in Paris, he romances the Countess D., and they fall seriously in love with each other. She also gets pregnant, to the scandal of everyone save her oblivious husband: “men took bets on whether the Countess would give birth to a white or black baby.” Disaster is averted when the (black) baby is swapped with the newborn of a destitute woman, and Ibrahim’s son is raised far far away.

Thus the public, which had anticipated an uproarious scandal, was frustrated in its expectations and had to content itself with mere vilifications.

Ibrahim, displaying characteristic caution, decides it best to leave the Countess before (a) her husband finds out, or (b) the Countess grows tired of him. Ibrahim does not foresee his own love dying, but he’s sufficiently alarmed by the prospect of losing her that “the torments of separation would probably be less painful.” Though brutally matter-of-fact to himself, he handles the matter with spectacular grace in his Dear D. letter to the Countess:

My happiness could not last. I have enjoyed it in defiance of fate and nature. You were bound to cease loving me: the enchantment was bound to vanish…Society, with its fickle ways, persecutes in practice what it permits in theory: its cold mockery would have sooner of later overpowered you, it would have humbled your soaring spirit, and you would have in the end have grown ashamed of your passion…What would then have become of me? No1 I’d sooner die, I’d sooner leave you, than wait for that terrible moment…

Your tranquility is dearest of all to me, and you could not enjoy it while the gaze of society was fixed on us…Just think: should I subject you to the same worries and dangers even longer? Why struggle to unite the fate of such a tender and graceful creature with the unlucky lot of a Negro, a pitiful being, scarcely granted the title of man?

The Countess is upset but gets over it and takes a new lover. Ibrahim responds with the resignation that he did the right thing but wishes it hadn’t been the right thing:

What sensations filled Ibrahim’s heart? Jealousy? Rage? Despair? No; rather a deep benumbed feeling of depression. He kept repeating to himself: I foresaw this; this had to happen…He wept for al long time. The tears eased his sorrow. Then, looking at his watch, he realized it was time to go.

Ibraham’s sensible circumspection contrasts with very nearly every other character in the Pushkin oeuvre, not to mention the dominant archetypes of Russian literature in general, who tend much more toward the passionate than the hyper-rational. He also contrasts with the bumbling fop Korsakov, a friendly though callous noble back from Paris who doesn’t know Russian matters and is soon humiliated at a ball through a ritual fraternity-style hazing presided over by Peter himself. Korsakov’s mistake was in trying to dance with the young Natasha, whom Peter soon decides would make a great bride for Ibrahim, and so suggests a marriage. Ibrahim initially demurs, but after Peter insists, Ibrahim starts to entertain the idea:

To marry! And why not? Or am I destined to spend my life in solitude, never experiencing the greatest joys and most sacred obligations of a man, just because I was born below the fifteenth parallel? I cannot hope to be loved, but that is a childish objection. Can one trust love in any case?…The Emperor is right: I must ensure my future…I will not demand love from my wife: i shall be content with her fidelity. As for her friendship, I will win it by unfailing tenderness, trust, and indulgence.

Natalia’s family is horrified. “Don’t throw Natashnka into the clutches of that black devil,” cries her grandmother. But her grandfather accedes, for three reasons. First, the Emperor has asked; second, the Emperor promises great favor to his whole family; and third, Natalia is in love with Valerian, an orphan of lower origins whom her family took in. Her grandfather is so horrified by her love for Valerian that he decides that marriage to Ibrahim is the best course to stave off his daughter’s unfortunate passion. Natasha is thoroughly repulsed and takes sick just to avoid Ibrahim, only to find out that her family is now apparently entranced with him. (Her aunt says, “What a pity he’s black; otherwise we couldn’t wish for a better bridegroom.”) This is, she realizes, because of her love for Valerian, and she is stuck.

Only one hope remained for her: to die before the hateful marriage came to pass. This idea comforted her. She submitted to her fate with a faint, sorrowful heart.

And that’s where Pushkin stopped. Pushkin’s friend A. N. Wulf wrote that “The main intrigue of the novel, as Pushkin says, will be the sexual infidelity of the Negro’s wife, who gives birth to a white child, and is punished by being banished to a convent”–an inversion of the earlier adulterous pregnancy. (Indeed, this did indeed happen with the real Ibrahim’s first wife, who went to jail for ten years.) Would the father be Valerian? Korsakov?

Even in the short fragment, two contrasting portrayals repeat. First, Ibrahim as the superior noble, favored by Peter, adored by the Countess, possessed of rare intelligence and wisdom easily besting that of fools like Korsakov and Valerian, traits for which he is recognized not only by the Emperor but by most of the characters. Second, Ibrahim as the curiosity and outsider, given the gifts of nobility yet sealed off from familial and amorous integration with the native population among which he lives. It is not until the Emperor proposes the marriage that Ibrahim even considers the possibility of starting a lineage and becoming a patriarch.

The opposing portrayals meet in the reaction to the marriage: while Natasha’s family disdains Ibrahim on racist grounds, her grandfather still prefers him (in a second) over a lower-class heel like Valerian. Ibrahim becomes the instrument by which the lower class can be kept out of the family and their nobility preserved. This time, class trumps race. This was to end in the irony that a white baby would signify Natasha’s infidelity and betrayal, and would presumably meet with a worse fate than the secret but treasured son of Countess D. Yet both these relationships are less inflected by race than his relations with most people. He considers himself an object of curiosity to most: “As a rule, people looked at the young black man as if he were some strange phenomenon.” He even resents the affections of women because of this, as “He felt that in their eyes he was a kind of rare animal,” and he dislikes being fetishized in that way. Yet on the next page the narrator intercedes and tells us that many women do see him “with feelings more flattering than mere curiosity, though he in his prejudice either did not notice anything or fancied only flirtation.” It takes the Countess’ guileless attention to dissolve his suspicions and allow him to fall in love.

So Pushkin tells us explicitly that for all his intelligence, there are limits to what Ibrahim knows of other people’s thoughts, and he cannot always distinguish genuine affection from fetishistic curiosity. The question, then, is whether this is the source of Ibrahim’s doubts about the Countess. His performance regarding her, in relationship and in separation, is seamless, but when he worries that the Countess is capricious, is the caprice in matters of love alone, or with regard to her perception of race as well? Does he fear that he will fall out of being viewed as a human and become a curiosity again? The same confusion ironically comes to light in Natasha’s loathing of Ibrahim, which, because it originates from her love of Valerian, obscures whether she sees him as a curiosity or merely as the guy she’s being forced to marry. And despite Peter’s good will, Natasha’s family goes through with the marriage because of his identity as a noble, which sufficiently overshadows his race, yet also reduces him to a single dimension.

There is an undercurrent of race-as-epistemic-confusion, because the introduction of a new social category (race) knocks existing categories (class, family role, even lover) off-kilter, and not in predictable or unidirectional ways. Translator Peter Debreczeny suggests that inconsistency and general confusion, particularly with regard to Ibrahim’s character, prevented Pushkin from continuing the novel. It’s hard to say. But while Eugene Onegin may be the more sharply-drawn and memorable character, I find Ibrahim to be the more mysteriously evocative.

Georg Simmel’s Philosophy of Money: 2. The Value of Money as a Substance