The Simpsons perform The Coen Brothers’ “A Serious Man”

Homer: Someday you’ll thank me for this, son.

Homer: You know, when I was a boy, I really wanted a catcher’s mitt, but my dad wouldn’t get it for me. So I held my breath until I passed out and banged my head on the coffee table. The doctor thought I might have brain damage.

Bart: Dad, what’s the point of this story?

[After the Simpsons receive a large idol head of Xtapolapocetl, the Olmec god of war, as a reward from Burns.]

Marge: The moral of this story is a good deed is its own reward.

Bart: Hey, we got a reward. The head is cool!

Marge: Well then… I guess the moral is no good deed goes unrewarded.

Homer: Wait a minute! If I hadn’t written that nasty letter, we wouldn’t have gotten anything!

Marge: Well… then I guess the moral is the squeaky wheel gets the grease.

Lisa: Perhaps there is no moral to this story.

Homer: Exactly! It’s just a bunch of stuff that happened.

[I liked A Serious Man.] 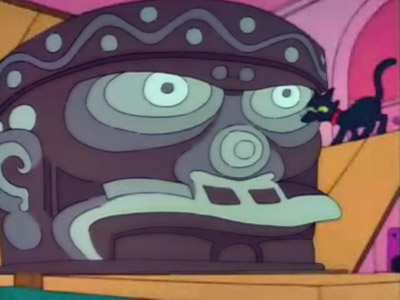 From Paul Bowles: The Sheltering Sky