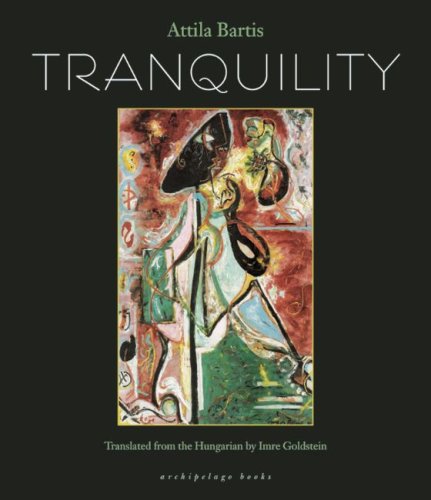 This book just won the Three Percent Best Translation of 2008 prize, and while I can’t speak to the translation (though I have it on good authority that it’s excellent–thanks GJ), I was happy to have it win, being a booster of Hungarian lit in general (and Laszlo Krasznahorkai in particular). Jeff Waxman describes a not-uncommon worldview of Hungarian literature when he says, “Tranquility is a book of unfathomable realism—by which, of course, I mean endless cruelty, depthless pain and emotional deadness.” Hungarian director Bela Tarr said it even better:

And back then I thought “Okay, we have some social problems in this political system – maybe we’ll just deal with the social question.” And afterwards when we made a second movie and a third we knew better that there are not only social problems. We have some ontological problems and now I think a whole pile of shit is coming from the cosmos. And there’s the reason. You know how we open out step by step, film by film. It’s very difficult to speak about the metaphysical and that. No. It’s just always listening to life. And we are thinking about what is happening around us…I just think about the quality of human life and when I say ‘shit’ I think I’m very close to it.

And it’s fair to say Bartis subscribes to something on the order of this view. What he brings to Tranquility that is very much his own is hysteria, at a level that is rarely encountered at such sustained length. Bernhard is a good contrast: while Bernhard’s narrators are obsessive, ranting, and irate, they are very rarely hysterical. Bartis’s breathless portrayal of unrelenting stress and compression owes the most, I’d say, to Celine and his spiritual disciple E.M Cioran, with a bit of Portnoy’s Complaint (namely, the end) mixed in.

And with a book that is pitched so consistently at the level of hysteria, Bartis has to keep the changes coming so that the tone does not become monotonous. The story of Andor, a middle-aged man, and his exceedingly unhealthy realationship with his mother and only slightly healthier relationships with several women careens around just as Andor careens between the three women in his life (and the one absent one, his sister), never settling in one place long enough to set up a sustained narrative. This is evidently intentional, as the plot necessarily cannot get started with such a tone at work. Any concession to traditional narrative dynamics would wreck the effect, and this book is all about effect.

Such a sustained howl can become numbing or exhausting; at times Bartis piles on so much pain that the book risks becoming a shaggy-dog story. It’s ultimately Andor’s relationship with his mother, and the sheer acuity and inexorability of it, that holds it all together. The other women are sweet relief in comparison. For Bartis, it seems that that level of hysteria, that sheer limit at which there is no appeal to reason and no possible escape, is fundamentally fostered in the mother-son bond.