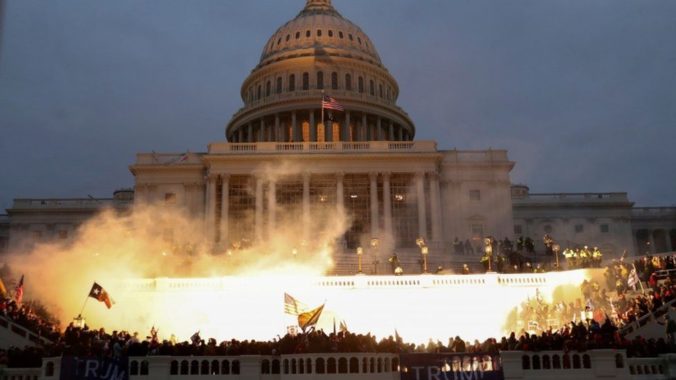 Common knowledge is that which I know and that which I know everyone else knows. That, at least, is the easiest way to put it for my purposes here, which is how a large number of people came to believe that Donald Trump won the 2020 election—and subsequently constructed an intellectual edifice around this conviction that led to the January 6 Capitol riots.

It’s a commonplace now that we live in a fragmented age of filter bubbles in which everyone can locate a collection of online resources which will reinforce and support their views. That’s not enough, however, to get us to the point of gross norm-violating behavior. The news niches that provide reinforcing fodder to the left, right, and everywhere in between do so with an implicit antagonism toward other niches. Such conflict is their lifeblood. Readers are aware that as they embrace one point of view, there are others that, however erroneous and dangerous they may be, still coexist.

It’s only with the growth of communities of people interacting that most people gain such courage in their convictions to defy that which authoritative sources (media, political, corporate) deem to be acceptable narratives and acceptable norms. These communities generate more than validation of one’s preexisting beliefs. They generate the common knowledge that I know that many others feel the same as I do, others to whom I am joined in a community.

David Lewis gave the most well-known account of common knowledge in 1969:

Let us say that it is common knowledge in a population P that X if and only if some state of affairs A holds such that:

Historically in offline society, the second condition is the most difficult to attain. If there is consensus in the truth of some belief X in a community, that is likely a product of the ambient environment surrounding the community, attained through news, one-on-one discussions, and so on. But the knowledge that everyone else knows X is harder to glean. It can be asserted, but unless X is some fact/norm blatantly reflected in the behavioral cues of everyone one encounters (say, “You should always wear clothes in public”), the bar for X crossing into common knowledge is rather high.

Online social spaces, by their very structure and nature, lower the bar drastically by providing many-to-many broadcast channels. One rarely communicates to more than a handful of people at a time in offline, everyday life. Online, any space such as Facebook, Twitter, Reddit, a blog with comments, or a message board by default provides broadcast capabilities to every individual who contributes. To post X to an online community P on any of these networks is to communicate several things:

In real life, everyday expressions of X only communicate (1) and provide a fraction of push on (2), and so no common knowledge is produced. In an online community, however, communications generate all three and provide far greater momentum toward common knowledge. Any person’s post can serve as a proxy for the unexpressed beliefs of any other person in that community. By observing how others react to someone else posting that they believe X, an observer can be implicitly validated (or rejected) within the community if they also believe X.

Many-to-many broadcasting allows, uniquely, for common knowledge to come into being far more easily in the absence of authoritative mediation and without a centralized locus of communication. Everyone in P is, by default, announcing their beliefs with a megaphone, and unlike in real life, the online community P can hear everyone’s megaphone. No one is conversing; everyone is broadcasting.

The result is discursive mob rule. For any significant belief X, momentum quickly builds up in a positive feedback loop to the point where X can reach common knowledge, and does so in the absence of any central authority. The much-vaunted moderation demanded by social network critics is not a sufficient impediment to this momentum, since moderation is very rarely invisible. If moderation removes statements of belief in X, that is tantamount to validating that many others believe that X. Moderation helps the push toward common knowledge of X along just as much as the posting of X does.

Many-to-many broadcast networks can even provide the illusion of greater unity of belief than actually exists, since not all members of a community use the megaphones. If a minority of members proclaim belief X, where X is something like “It would be a great idea to invade the Capitol building,” and there is little stated dissent, the silent votes of abstention or dissent do not get counted in the assessment of common knowledge. Where in real life there is a massive void of ignorance of what other members of one’s community think in one direction or another, in online communities the slant goes toward whoever is most aggressive with their megaphones.

Combined with the low barrier of community creation and the balkanization of online communities into self-selecting and self-reinforcing belief networks, the positive feedback becomes overwhelming, but only after many-to-many broadcasting is in play. A steady diet of clickbait and red meat can provide preoccupied partisans, but do not by themselves ensure radicalization because the concepts being promoted remain at the fairly simplistic level of soundbites. The achievement of QAnon was something beyond that which Fox News or Rush Limbaugh could ever have accomplished, because the actors playing Q only provided the barest of breadcrumbs around which the many-to-many broadcast dynamics forged a common knowledge belief system. This belief system possessed (and still possesses) a coherence, complexity, and sheer resistance to outside intrusion that could not have been possible without a far lower barrier to its constituent beliefs passing into common knowledge than was even possible until recently.

The hive mind is here, and its workings are a bloodsport.