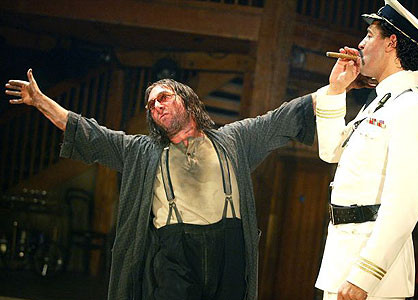 John Marston was one of the nastier Renaissance playwrights, and his lack of restraint eventually appears to have gotten him in so much trouble that he had to leave the stage altogether and enter the clergy. His play The Malcontent, which was probably performed in 1603 and then published in 1604, is a severe melodrama of a deposed Duke, Altofronto, grouchily plotting to regain his rulership by pretending to be a truth-telling counselor and misanthrope–named Malevole, just to make that point clear–and bringing out the worst tendencies of those in the court. They don’t need much encouragement, since the court’s “minion” Mendoza, who is sleeping with the current Duke’s wife, has plenty of Machiavellian plans of his own, and Altofronto/Malevole just needs to tap him to push him over the precipice. The expected “happy ending” is more reassuring than that of Measure by Measure, but even less convincing.

But there are two poetic, though somewhat out of place, soliloquys reflecting on the wretchedness of man that caught my attention. They have the typical gnarled flow of Marston’s prose, which seems to be closer to its Roman Silver Age antecedents than anyone else’s (Seneca was a huge influence at the time). And thanks to the notes of G. K. Hunter in my Revels edition, I see that both speeches were adapted from a single source: Joshua Sylvester’s translation of Du Bartas’ epic religious poems. Marston alters them both in style and tone, but he appropriates structure and imagery freely. The first invokes the title of the play and is a looser borrowing:

MALEVOLE
I cannot sleep ; my eyes’ ill-neighbouring lids
Will hold no fellowship. O thou pale sober night,
Thou that in sluggish fumes all sense dost steep ;
Thou that giv’st all the world full leave to play,
Unbend’st the feebled veins of sweaty labour!
The galley-slave, that all the toilsome day
Tugs at his oar against the stubborn wave,
Straining his rugged veins, snores fast ;
The stooping scythe-man, that doth barb the field.
Thou mak’st wink sure : in night all creatures sleep ;
Only the malcontent, that ‘gainst his fate
Repines and quarrels, — alas, he’s goodman tell-clock !
His sallow jaw-bones sink with wasting moan ;
Whilst others’ beds are down, his pillow’s stone.

The Night is she, that with her sable wing,
In gloomy Darkness hushing every thing,
Through all the World dumb silence doth distill,
And wearied bones with quiet sleep doth fill.
Sweet Night, without Thee, without Thee, alas,
Our life were loathsome; even a Hell to pass.
……
He that, still stooping, tugs against the tide
His laden barge alongst a River’s side,
And filling shores with shouts, doth melt him quite ;
Upon his pallet resteth yet at Night.
He, that in summer, in extremest heat
Scorched all day in his own scalding sweat,
Shaves with keen Scythe, the glory and delight
Of motley meadows ; resteth yet at night,
……
Only the learned Sisters’ sacred Minions,
While silent Night under her sable pinions
Folds all the world, with painless pain they tread
A sacred path that to the Heavens doth lead.

Where he borrows images, Marston sharpens the prose: “The galley-slave…tugs at his oar against the stubborn wave” in Sylvester becomes “He that, still stooping, tugs against the tide” in Marston. “He that shaves with keen scythe the glory and delight of motley meadows” becomes “The stooping scythe-man that doth barb the field.” The drastic difference is that into Du Bartas’ picture of sleep’s respite from the cruel world, Marston injects the malcontent, “goodman tell-clock,” who can’t sleep. (I admit I don’t know what Sylvester is getting at with “painless pain.”)

The second speech is more unquestionably plagiaristic. It is delivered by Pietro, Malevole’s successor and target. Pietro, here, is describing to his wife Aurelia the terrible hell she’s brought to him by sleeping with Mendoza.

PIETRO
My cell ’tis, lady ; where, instead of masks,
Music, tilts, tourneys, and such courtlike shows,
The hollow murmur of the checkless winds
Shall groan again ; whilst the unquiet sea
Shakes the whole rock with foamy battery.
There usherless the air comes in and out :
The rheumy vault will force your eyes to weep,
Whilst you behold true desolation :
A rocky barrenness shall pierce your eyes.
Where all at once one reaches where he stands,
With brows the roof, both walls with both his hands.

Who, Full Of wealth and honour’s blandishment,
Among great Lords his younger years hath spent ;
And quaffing deeply of the Court-delights,
Us’d nought but tilts, tourneys, and masks, & sights –
If in his age his Prince’s angry doom
With deep disgrace drive him to live at home
In homely cottage, where continually
The bitter smoke exhales abundantly
From his before-un-sorrow-drained brain
The brackish vapours of a silver rain :
Where usherless, both day and night, the North,
South, East and West winds enter and go forth,
Where round-about, the low-roofed broken walls
Instead of Arras hang with Spiders’ cauls,
Where all at once he reacheth as he stands.
With brows the roof, both walls with both his hands.

This Sylvester source passage is far harsher than the earlier, with knottier syntax to match. (“His before-un-sorrow-drained-brain” seems worthy of Marston. Or Robert Walser.) The context is a long simile for the expulsion from Eden, comparing it to a Prince who’s been reduced to living in poverty. Again, Marston roughs up Sylvester (Marston gets a “rheumy vault” out of Sylvester’s “homely cottage”), but Sylvester has already done half the work in making his prose so jagged. Marston had far less distance to go in adapting it into his style. The final image, of the inhabitant virtually trapped in a tiny room no taller nor wider than he is, is grim enough that Marston leaves it outright.

In both cases I prefer Marston for the sharper-edged and more visceral prose. Hunter cites an earlier critic from the 1930s using the passages as evidence of Marston’s lack of talent, so maybe we’ve finally caught up with Marston. (I think Eliot was a fan.)

Hunter points out that at least one other writer of the period, Thomas Tomkis, borrowed from the first Du Bartas passage. Hence one of the more common homilies of the Renaissance, lost in our originality-obsessed age: if you see a good image or a memorable theme, no matter how different the context to what you’re writing, don’t hesitate: steal it.