Plus (1976) is, at its heart, an attempt to use language to portray a situation that defies language. It deserves to be called “stream of consciousness” far more than most novels that claim the term, but that only reinforces the sense that words are not quite right for the situation at hand.

That situation is a disembodied consciousness, quite literally a brain in a vat, though in this case the vat is a spaceship orbiting Earth, the brain extracted from a husband and father who had suffered something of a severe decline in health before being given the “opportunity” to participate in this creepy research program, where he shares the vessel with a large amount of plants. The consciousness is named Imp Plus. As his consciousness develops, it’s clear that Imp Plus (“he” for convention’s sake) is certainly not identical with his past human embodiment, even though he possesses fragments of his memories, which he struggles to comprehend.

The novel is, as far as I can tell, free of metafictional trickery. The story is told straight and the ambiguity is purely that of language, not of plot or narrative. But the language is intrinsically ambiguous here. McElroy’s ambition is to take the language used by embodied creatures and try to show how it might be applied in a situation where one’s interface with the world has completely broken down and been wholly altered: senses removed and replaced by new kinds of neural inputs.

Consequently, the novel remains concertedly in linguistic suspension for most of its length. McElroy makes clear that language would cease to work (in the pragmatic sense) in such a situation. This is both the novel’s caprice and its achievement: without the past human incarnation, Imp Plus would never have language, so the novel is not as much a description of its stream of consciousness as it is a waste product of it. Yet that is as much of a clue as to Imp Plus’s consciousness as we can possibly get.

He found it all around. It opened and was close. He felt it was himself, but felt it was more.

There were birds around, and they were still as shadows. Imp Plus knew birds, but not so still. Birds with tails longer than they were. The tails were right.

Imp Plus knew he had no eyes. Yet Imp Plus saw. Or persisted in seeing.

Imp Plus did not have sockets, for if there were sockets where would they have been? There was no skull.

Sockets was a word.

These passages are from the first page. “Caved out” is the most striking coinage here: repurposing words to describe conscious experiences that words have never before described. What it is to “cave out” is not revealed or defined as such–the words are an approximation at best. Meaning is established through the sheer aggregation of such terms and how they relate to Imp Plus’s remaining memories in the time when he was embodied as a human.

And McElroy does this very well, or at least he remains utterly true to this conception and does not cheat by providing contrived linkages between Imp Plus’s words and his current reality. The language is as much as you’re going to get. McElroy is careful to reuse terms to provide a real integrity to Imp Plus’s consciousness. The novel truly does feel like the verbal portrayal of the evolution of a developing consciousness, no small achievement.

For the blue discharge showed its dart at once and more than once not just in the spot the Dim Echo might have been calling hypothalamus right above the furled flame now still more tightly furled. This time the discharge of line or dart went on longer or stronger against the Sun’s flood.

But this was not the change. The change was that from the caving-out, the caving-in, the breakage like a stretch where cushions of blood shot into cords that twisted narrower and narrower into instants like quanta, there was no pain.

As Imp Plus‘s consciousness develops, memories from his past surface, provided to him partly by his own Dim Echo. He hears voices from Ground Control, the menacingly ambitious Good Voice and the more vulnerable, though still unsettling, Acrid Voice. Aided by sun and vegetation, he begins to grow some sort of new body, Swamp Thing-style.

McElroy places such a burden on language that the plot remains subordinate for much of it. It is not a long novel, and much of its lengths owes not to plot but to McElroy setting up the webs and networks of phrases needed to help the reader triangulate what their usage means. But there is a Cold War feel to it, a certain power and terror placed in technology that has become far more diffuse today, where society no longer perceives the dangers of technology to be rooted singularly in their militarization and capacity for massive instantaneous destruction and death. But that period detail is submerged beneath the much less time-bound linguistic play.

After I’d finished Plus, Dan Visel helpfully sent me an essay McElroy wrote many years later, “Life Science,” discussing the book. I was impressed by how closely my impression matched McElroy’s description of what he intended the linguistic process to represent:

In a rhetoric at first narrow. As subtraction may shape an abstract. Implying shock, I thought, but maybe a kind of experience other than shock.  Inclining.  Hearing. Or some building of slow rudiments, a weighing, reaching touch through word itself –  accreting surely painfully, but maybe not. Quizzically adding. Secretly getting there, I trusted.

Perhaps before we see, we hear, and, hearing, see the point, feel what is struggling to gather and locate. By association. By logic. By illogic in the questing text.

The discoveries of this being Imp Plus, indeed of being Imp Plus, measure themselves by a development of words, terms, modifiers like acts. In Plus, which is not an essay but a story, statements think themselves toward embodiment,  thoughts thicken into tissue: language does not explain so much as be itself what it is about. But, though that sounds like poetry, language here is only partly finding words.  It is a feature of an organism, evolved and re-evolving, in some sense silently reacting to at first a job agreed on.

McElroy says that the book is not about language, and that is indeed true. McElroy justifies what could merely be linguistic theatrics by genuinely convincing that the linguistic deformations are coming about through a concrete though very aberrant situation. Such justification for linguistic experimentation is extremely rare, and since the other example that comes to mind is Riddley Walker, perhaps science fiction provides it more than most genres.

He summarizes that justification as follows:

[L]anguage, body, and thought are not only mutual metaphors but, much more, features of this organism developing in my realistic speculation the way parallel features of other organisms develop…So metaphor is tentatively displaced in favor of homology.

Here I depart a bit from McElroy, in that I see homology as being absorbed into metaphor, rather than displacing metaphor. While traditional notions of tenor and vehicle (in I.A. Richards’ terminology) or metaphier and metaphrand (in Julian Jaynes’ terminology) do not quite apply here due to the dislocation from any recognizable ground, I’ve long come to think that the seeming unity of the grounding of a metaphor is more illusion than truth. Metaphors for love do not operate on a concept any less fuzzy than what is occurring to Imp Plus, though it’s a concept that we deal with far more often than neurokinesthesis and plant-body formation. Homology becomes the root of metaphor in Plus because it’s all that Imp Plus has left.

In the essay, McElroy cites Richard Dawkins and Julian Jaynes (whose Origin of Consciousness in the Breakdown of the Bicameral Mind hadn’t yet been published when McElroy wrote Plus, or else I’d easily believe it had influenced McElroy), though I’m surprised he doesn’t cite Merleau-Ponty, whose philosophy of conscious embodiment seems to be close at hand throughout Plus. Perhaps I’m reading into it due to the shared subject matter, or perhaps Merleau-Ponty and McElroy, both beautiful writers, independently arrived at presentations of very similar truths.

I was even more surprised that McElroy compared Plus to the brilliant, tormented novels of brilliant, tormented Italian writer Carlo Emilio Gadda, an engineer who wrote That Awful Mess on Via Merulana and the unfinished Acquainted with Grief, as well as many untranslated works including what I’m told is a caustic and obscene portrait of Mussolini, Eros and Priapus. Gadda planted Celine-esque levels of cynicism and bile on top of his carefully written and plotted works, so his tone is drastically different from Plus. But going back through Gadda, I can see a more abstract similarity with Plus, in the way that details of human evil and wretchedness are put in place with a tighter relation to one another than in most fiction, not in the service of a facile psycholgism, but in service to real physical processes. McElroy quotes an early passage exactly to this effect:

Because Ingravallo, like certain of our philosophers, attributed a soul, indeed a lousy bastard of a soul, to that system of forces and probabilities which surrounds every human creature, and which is customarily called destiny.

Because McElroy is not dealing with human evil and wretchedness–not so baldly, anyway–the physical viscerality of the novel does not share an emotional viscearlity that accompanies Gadda, which is why I would never have made the connection. But on the level of craft the connection is clearly there.

A connection I did make was to Michael Berlyn’s early Infocom text adventure, Suspended (1983), in which you played the lucky winner of a contest to stay in cryogenic suspension for thousands of years while monitoring the vital infrastructure of a planet, only to be woken up when equpiment malfunction causes transportation, food, and environmental conditions to go haywire and start causing mass die-offs. Because you’re stuck in your little pod, you have to explore only through six robots, each of which has, at best, one sensory modality. (And the robot with vision starts off broken.) In particular, there’s the robot Poet, who diagnoses faulty current flow, but otherwise describes his environment in very analogical terms:

This is another fine mess you’ve got me into. Umm, umm umm! A processor sits on the floor, munching and spitting electrons. Button, button, who’s got the button while the socks ablaze with color. A brain tres sits in the primo socket, and a brain quart sits in the secondary socket.

But Berlyn was dealing with some of the same issues, which was how to use human language in a situation where it would not naturally occur, and using stretched, but precise, analogies in a similar manner to McElroy. Gadda’s analogies are precise but also “realistic.” But that does not make them differ in kind from McElroy’s, or Poet’s. 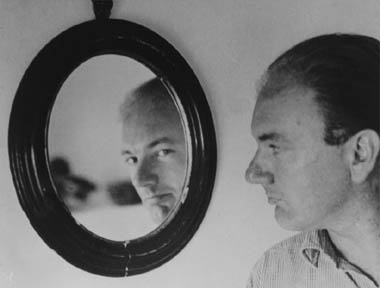