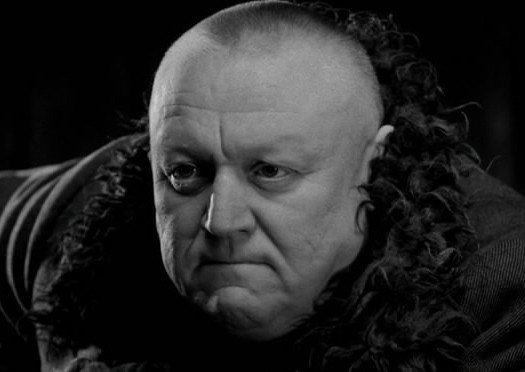 BERNHARD: Because everything’s in ruins. Everything’s been degraded, but I could say that they’ve ruined and degraded everything. Because this is not some kind of cataclysm, coming about with so-called innocent human aid. On the contrary, it’s about man’s own judgement, his own judgement over his own self, which of course God has a hand in, or dare I say takes part in. And whatever he takes part in is the most ghastly creation that you can imagine. Because, you see, the world has been debased. So it doesn’t matter what I say, because everything has been debased that they’ve acquired. and since they’ve acquired everything in a sneaky, underhand fight, they’ve debased everything. Because whatever they touch-and they touch everything-they’ve debased. This is the way it was until the final victory. Until the trimphant end. Acquire, debase, debase, acquire. Or I can put it differently if you like. To touch, debase and thereby acquire, or touch, acquire and thereby debase. It’s been going on like this for centuries, on, on and on. This and only this, sometimes on the sly, sometimes rudely, sometimes gently, sometimes brutally, but it has been going on and on. Yet only in one way, like a rat attack from ambush. Becouse for this perfect victory, it was also essential that the other side, everything that’s excellent, great in some way and noble, should not engage in any kind of fight. There shouldn’t be any kind of struggle, just the sudden disappearance of one side, meaning the disappearance of the excellent, the great, the noble. So that by now these winning winners who attack from ambush rule earth, and there isn’t a single tiny nook where one can hide something from them, because everything they can lay their hands on is theirs. Even things we think they can’t reach – but they do reach – are also theirs. Because the sky is already theirs and all our dreams. Theirs is the moment, nature, infinite silence. Even immortality is theirs, you understand? Everything, everything is lost forever! And those many noble, great and excellent just stood there, if I can put it that way. They stopped at this point, and had to understand, and had to accept, that there is neither god nor gods. And the excellent, the great and the noble had to understand and accept this right from the beginning. But of course, they were quite incapable of understanding it. They believed it and accepted it but they didn’t understand it. They just stood there, bewildered, but not resigned, until something – that spark from the brain – finally enlightened them. And all at once they realized, that there is neither god nor gods. All at once they saw that there is neither good nor bad. Then they saw and understood that if this was so, then they themselves do not exist either! You see, I reckon this may have been the moment when we can say that they were extinguished, they burnt out. Extinguished and burnt out like the fire left to smoulder in the meadow. One was a constant loser, the other was the constant winner. Defeat, victory, defeat, victory, and one day – here in the neighbourhood – I had to realize, and I did realize, that I was mistaken, I was truly mistaken when I thought that there has never been and could never be any kind of change here on earth. Because, believe me, I know now that this change has indeed taken place.

OHLSDORFER: Come off it, that’s rubbish.

Yes, they really did give him the name Bernhard. He even looks a bit like Thomas Bernhard. Perhaps his words are to not to be taken as the thoughts of Bela Tarr or Laszlo Krasznahorkai.