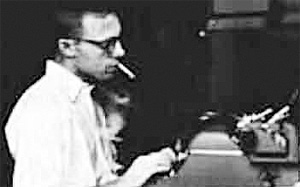 Sci-fi great Robert Sheckley‘s “Warm” is one of his more flat-out horror stories, comparatively free of the sardonic cynicism that usually marks his fiction. It’s even got a bit in common with the Lovecraft formula of the man exposed to unfortunate knowledge that drives him mad. The gnosis here, though, isn’t any sort of secret otherness that controls our world, just the standard scientific, materialist worldview–the “scientific image of man” in Wilfrid Sellars’ terminology.

Driven by an especially unhelpful voice in his head, protagonist Anders starts seeing other people not as people but as aggregates of “thoughts, expressions, movements” and raw material stuff. This happens just as he is trying to confess his love to the lovely Judy, who rather likes him as well. Judy is wholly generic, but given the story, that more or less fits. Here’s Anders talking to Judy, the voice chiming in:

“Yes … I wondered what you were doing at noon,” the reactive machine opposite him on the couch said, expanding its shapely chest slightly.

“Good,” the voice said, commending him for his perception.

“Dreaming of you, of course,” he said to the flesh-clad skeleton behind the total gestalt Judy. The flesh machine rearranged its limbs, widened its mouth to denote pleasure. The mechanism searched through a complex of fears, hopes, worries, through half-remembrances of analogous situations, analogous solutions.

Love quickly fades from Anders’ mind, since it’s very hard for him to feel love for a flesh machine or a reaction machine. (Vladimir Sorokin would use this sort of dehumanizing language to great effect in The Ice Trilogy; see my essay Meat and Clones)

“Can I get you a drink?” the reaction machine asked.

At that moment Anders was as thoroughly out of love as a man could be. Viewing one’s intended as a depersonalized, sexless piece of machinery is not especially conducive to love. But it is quite stimulating, intellectually.

Sheckley uses the terminology of gestalt psychology, though it was only one contemporary explanation of the psychological struggle between scientific and humanistic worldviews. The story endures because Sheckley transcends the particular argot of gestalt psychology by portraying the schizophrenic-like collapse in prosaic terms.

They were one with the lights, which lent their tiny vision. They were joined to the sounds they made, a few feeble tones out of the great possibility of sound. They blended into the walls.

The kaleidoscopic view came so fast that Anders had trouble sorting his new impressions. He knew now that these people existed only as patterns, on the same basis as the sounds they made and the things they thought they saw. Gestalts, sifted out of the vast, unbearable real world.

“Where’s Judy?” a discontinuous lump of flesh asked him. This particular lump possessed enough nervous mannerisms to convince the other lumps of his reality. He wore a loud tie as further evidence.

“Hope it isn’t anything serious,” the vocal flesh remarked.

This sort of psychic dissolution is a major theme in 20th century fiction. It’s there in Beckett, obviously, but also across the board in new wave science fiction, like J. G. Ballard’s “Manhole 69.” I see it as the successor theme to the mechanistic clockwork universe theme that you read about in everything from Dangerous Liaisons to Nietzsche. There determinism was just the problem, but now the social conventions of the self are collapsing due to the popularization of the ideas of Darwin, Freud, Watson and Crick, and pick-your-favorite-scientist.

And that brings up P. F. Strawson’s famous essay on determinism, “Freedom and Resentment.” Strawson draws a contrast between the “participant attitude,” which is the everyday attitude with which we treat people as autonomous agents with moral responsibility and freedom of choice; and the “objective attitude,” which is the scientific attitude that sees people as “reaction machines.” Though Sheckley uses the vocabulary of gestalt psychology, the story works just as well in showing a man moving entirely into the domain of the “objective attitude” and being driven insane by the ensuing alienation. Here is how Strawson describes the objective attitude:

To adopt the objective attitude to another human being is to see him, perhaps, as an object of social policy; as a subject for what, in a wide range of sense, might be called treatment; as something certainly to be taken account, perhaps precautionary account, of; to be managed or handled or cured or trained; perhaps simply to be avoided, though this gerundive is not peculiar to cases of objectivity of attitude… If your attitude towards someone is wholly objective, then though you may light him, you cannot quarrel with him, and though you may talk to him, even negotiate with him, you cannot reason with him. You can at most pretend to quarrel, or to reason, with him.

Strawson points out that there are groups of people whom society habitually sees only through the eye of the objective attitude, but that these people are inevitably treated as not fully human: children, schizophrenics, hopeless irrationals, etc. That is, as creatures that are either not human yet or are abnormal and perhaps in need of correction. To be human, it seems, requires that one fall under the gaze of the participant attitude. Being human requires that one be seen as beyond the domain of the mechanically/biologically natural and brought out as some kind of special agent.

Strawson ultimately appeals to “natural human reactions” as defining the participant attitude, with some degree of optimism, believing that we have a tendency to treat each other as such. But those natural human reactions are taking an awful beating. One of the reasons why Sheckley’s story evokes very real horror is that the gnosis to which it appeals is, on some level, knowledge that many of us come to gain as we grow up and are educated and learn more about people, social sciences, and statistics and probability. Lovecraft is a lot scarier if there’s a possibility that the secret knowledge might actually be true, and not so secret after all.