Analytic Philosophy at a Glance 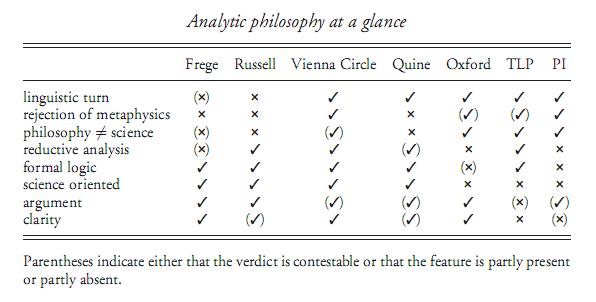 from Hans-Johann Glock’s What is Analytic Philosophy?

Update:Courtesy of j, this older diagram of Carnap on the Vienna Circle: 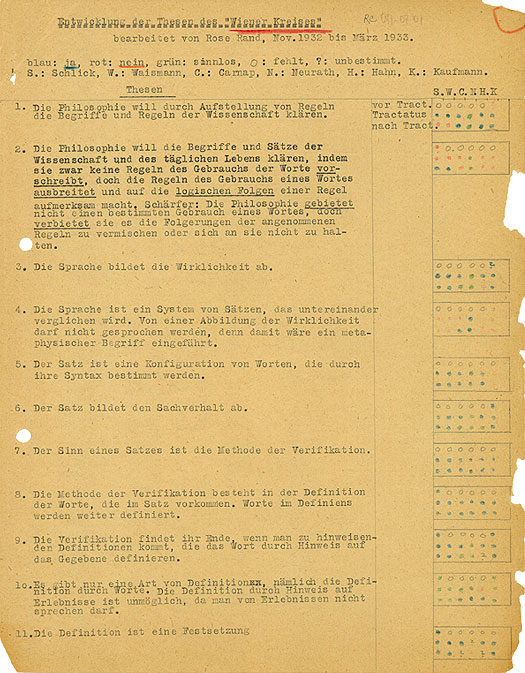 It must not be imagined that Iudushka was a hypocrite in the same sense as Tartuffe or any modern French bourgeois who goes off into flights of eloquence on the subject of social morality. No, he was a hypocrite of a purely Russian sort, that is, simply a man devoid of all moral standards, knowing no truth other than the copy-book precepts. He was pettifogging, deceitful, loquacious, boundlessly ignorant, and afraid of the devil. All these qualities are merely negative and can supply no stable material for real hypocrisy.

In France hypocrisy is the outcome of a man’s upbringing; it forms part of “good manners” so to speak, and almost always has a distinct political or social coloring…If this kind of hypocrisy cannot be described as a conviction, it is in any case a banner around which men who find it profitable to be hypocritical in this rather than in some other way can gather. They are conscious hypocrites, that is, they know it themselves and are aware that other people know it too. For a French bourgeois the universe is nothing but a large theater in which an endless play is going on and one hypocrite gives his cue to another.

We Russians have no strongly biased systems of education. We are not drilled, we are not trained to be champions and propagandists of this or that set of moral principles but are simply allowed to grow as nettles grow by a fence. This is why there are very few hypocrites among us and very many liars, bigots, and babblers. We have no need to be hypocritical for the sake of any fundamental social principles, for we have no such principles and do not take shelter under any one of them. We exist quite freely, i.e. we vegetate, babble, and lie spontaneously, without any principles.

Whether this is a matter for grieving or rejoicing is not for me to say. I think, however, that while hypocrisy may arouse fear and indignation, objectless lying makes one feel bored and disgusted. And so the best thing is not to discuss the advantages or disadvantages of the conscious as compared with the unconscious hypocrisy, but to keep away both from hypocrites and from liars.

And so Iudushka was a sneak, a liar, and a babbling fool rather than a hypocrite….

And so, like a sober, humorless Gogol, Shchedrin sets about proving his point, not just by portraying these characters in unrelentingly brutal detail, but by killing them off rather arbitrarily. In Dostoevsky and in Tolstoy, characters do tend to stick around so they can meet a fate, deserved or undeserved, that serves some dramatic or moral purpose. Shchedrin kills off characters prematurely to foreclose any possibility of redemption, though it quickly becomes clear there was never a chance anyway. What begins as a character sketch ends with that same character dying. Even by Russian standards, this is a miserable book.

I don’t know if Shchedrin had read Burke or Diderot, to whom he seems to be responding here, but his point that hypocrisy implies a bourgeois sort of moral self-awareness is well-taken, and I would say I see Shchedrin’s sort of hypocrite a lot more often than Rameau’s Nephew.

Proust, who was half ghost, immersed himself with extraordinary tenacity in the infinitely watery futility of the rites and procedures that entwine the members of high society, those denizens of the void, those phantoms of desire, those irresolute daisy-chainers still waiting for their Watteau, those listless seekers after implausible Cythereas.

Journey to the End of the Night

Those who, like Professor Ryle, revolt against a dichotomy to which
they have been once addicted, commonly go over to maintain that only
one of the alleged pair of opposites really exists at all. And so he, though
he does not believe the body is a machine, does believe that it alone,
and not the “ghost,” exists: he preaches with the fervour of a proselyte a
doctrine of “one world.” Yet what has ever been gained by this favourite
philosophical pastime of counting worlds? And why does the answer
always turn out to be one or two, or some similar small, well-rounded
philosophically acceptable number? Why, if there are nineteen of anything, is it not philosophy?

This reminds me of the computer scientist’s dictum that for any resource, there should either be zero, one, or an infinite number of it. But since 95 percent (my own estimate) of engineering is dealing with resource constraints, it’s more of a theoretical rule rather than a practical one. But we all want the universe to reduce to theory, right?

The Greeks seem to have been immune to this, though; see Plato (mis-)counting the 729 multiplier of happiness, or (as pointed out by Avrum Stroll) Aristotle counting up the 47 or 55 unmovable substances.

Update: Following on from comments, I have to quote this:

[at the edge of the universe, Fry sees alternative versions of himself and his friends on the other side]

Fry: So there is an infinite number of universes.

Before the first meeting, Schlick admonished us urgently not to start a discussion of the kind to which we were accustomed in the Circle, because Wittgenstein did not want such a thing under any circumstances. We should even be cautious in asking questions, because Wittgenstein was very sensitive and easily disturbed by a direct question. The best approach, Schlick said, would be to let Wittgenstein talk and then ask only very cautiously for the necessary elucidations.

When I met Wittgenstein, I saw that Schlick’s warnings were fully justified. But his behavior was not caused by any arrogance. In general, he was of a sympathetic temperament and very kind; but he was hypersensitive and easily irritated. Whatever he said was always interesting and stimulating, and the way in which he expressed it was often fascinating. His point of view and his attitude toward people and problems, even theoretical problems, were much more similar to those of a creative artist than to a scientist; one might almost say, similar to those of a religious prophet or seer. When he started to formulate his view on some specific problem, we often felt the internal struggle that occurred in him at that very moment, a struggle by which he tried to penetrate from darkness to light under an intensive and painful strain, which was even visible on his most expressive face. When finally, sometimes after a prolonged arduous effort, his answer came forth, his statement stood before us like a newly created piece of art or a divine revelation. . . . The impression he made on us was as if insight came to him as through a divine inspiration, so that we could not help feeling that any sober ratio- nal comment or analysis of it would be a profanation.

Thus, there was a striking difference between Wittgenstein’s attitude toward philosophical problems and that of Schlick and myself. Our attitude toward philosophical problems was not very different from that which scientists have toward their problems. For us the discussion of doubts and objections of others seemed the best way of testing a new idea in the field of philosophy just as much as in the fields of science; Wittgenstein, on the other hand, tolerated no critical examination by others, once the insight had been gained by an act of inspiration. . . . Earlier when we were reading Wittgenstein’s book in the Circle, I had erroneously believed that his attitude toward metaphysics was similar to ours. I had not paid sufficient attention to the statements in his book about the mystical, because his feelings and thoughts in this area were too divergent from mine. . . . Even at the times when the contrast in Weltanschauung and basic personal attitude became apparent, I found the association with him most interesting, exciting, and rewarding. Therefore, I regretted it when he broke off the contact. From the beginning of 1929 on, Wittgenstein wished to meet only with Schlick and Waismann, no longer with me and Feigl, who had also become acquainted with him in the meantime, let alone with the Circle. Although the difference in our attitudes and personalities expressed itself only on certain occasions, I understood very well that Wittgenstein felt it all the time and, unlike me, was disturbed by it. He said to Schlick that he could talk only with somebody who “holds his hand.”

And while Wittgenstein is for me unquestionably the greater thinker, Carnap still easily wins the day as one of the most resolutely sensible philosophers of the time:

The transformation and final abandonment of my religious convictions led at no time to a nihilistic attitude toward moral questions. My moral valuations were afterwards essentially the same as before. It is not easy to characterize these valuations in a few words, since they are not based on explicitly formulated principles, but constitute rather an implicit lasting attitude. The following should therefore be understood as merely a rough and brief indication of certain basic features. The main task of an individual seems to me the development of his personality and the creation of fruitful and healthy relations among human beings. This aim implies the task of co-operation in the development of society and ultimately of the whole of mankind towards a community in which every individual has the possibility of leading a satisfying life and of participating in cultural goods. The fact that everybody knows that he will eventually die need not make his life meaningless or aimless. He himself gives meaning to his life if he sets tasks for himself, struggles to fulfill them to the best of his ability, and regards all the specific tasks of all individuals as parts of the great task of humanity, whose aim goes far beyond the limited span of each individual life.