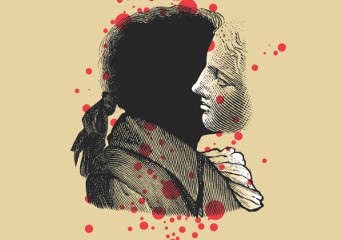 I’ve turned this book over in my head many times and I’m mostly still at a loss. I haven’t read a book so unlike anything else in some time. Hungarian author Miklós Szentkuthy (1908-1988) wrote the ten volumes of St. Orpheus Breviary over a forty year period from the 1930s to the 1970s, and Marginalia on Casanova is the first, published in 1939 but written some years before that.

The series, or at least this first volume, is a tour through the European past, a tour through Szentkuthy’s labyrinthine library, twisting through the stranger paths of civilized minds to counter the dominant stories we learn as we’re growing up. Szentkuthy’s choice of Casanova (1725-1798) of all people as his intellectual centerpiece for the first volume is perfectly representative. Casanova’s love life doesn’t interest him per se. There is very little of the gossip or scandal of Casanova in here. He is much more attuned to Casanova’s sensibility, his emotional responses, and his ethics (such as they are). That he compares Casanova to Pope Benedict XIV should give some idea of what he’s after.

Szentkuthy also compares Casanova to Proust: both spent their last years reflecting ambivalently on the social high life in which they had previously been engaged. But for Szentkuthy, Casanova is the more interesting figure because he conducted his life with far less remove than Proust, with less concerted intellectual analysis.

His goal, as far as I can summarize it, is to suspend his novel precisely between the intellectual realm and lived experience. He wants neither the rarefied abstraction of the essay, nor the conventional journalism of realism or the diary. For him:

a ‘thought’ is both: an absolute description together with an absolute stimulation. In other words, exactly that has become the crown of intellectuality, whereas previously it had been a blemish: its slaves are copying and lyrical bias. If we realize that these two blemishes are two prime merits and two possibilities which exclude all else–that will be a Copernican revolution in the history of thinking as Kant’s was in his time.

I am convinced that the most monotonous fiasco of a landscape description lies closer to the natural history of logic, truth, and intellectuality than all the philosophers from Plato to Kant…only décor is true logic. (133)

This particular idea was not new with Szentkuthy, but he presumably thinks that such a conception has never truly been elevated to preeminance. In all the expressions of the idea of thought-as-description-and-feeling, from Plato to Nietzsche, the difficulty has always been in the execution and portrayal of the mysterious stimulation/feeling. Pinning it down has proved difficult if not impossible.

Whether or not Szentkuthy achieved his goal of isolating the true nature of thought, he came up with something that I have never seen before. There are certainly echoes of Proust and Joyce (Szentkuthy later translated Ulysses into Hungarian–I cannot even imagine), and he can be seen to foreshadow the impressionistic works of Guy Davenport, Roberto Calasso, Umberto Eco, and Claudio Magris.  Among his Hungarian contemporaries, there maybe is a bit of Gyula Krúdy’s madness, but really, Szentkuthy was in his own universe. A universe of books. He compares his place in it to Orpheus in the underworld.

Yet his goal was to extract vital feeling from the books, the eternal paradox of the emotif intellectual:

Anyone unable to cast aside the humbugs of ‘knowledge’ & ‘sentiment’ and get used to that laughing, chattering society even from an intellectual point of view is of a thousand times higher order than a university chair or a Buddhist monastery and will remain a cowardly romantic of darkness. Our profoundly moralistic and profoundly rational nature, of course, hardly bears to avow the ascetic school of amorality and ‘ignorance,’ yet it must–because that is the maximum that man can act in his hideous loneliness. When Casanova crossed from wood into the garden, from solitariness to a clique, he bestrode philosophics and thereby won everything. (78)

Szentkuthy is possibly a bit at odds with himself here. He does not prescribe irrationalism, but he’s looking for something that will be evoked without needing argument. Perhaps a later passage will help explain:

No art or blind philosophy hit upon such a perfect analysis and monument to love than whoever it was who, as the Hungarian colloquialism has it, “discovered sealing wax,” the lighting of a candlestick, the seething, the initial flame and smoke, the smell of incense, the dripping, the scorching paper, spreading the blob of wax, the signet ring, the negative of the crest on the seal and its positive impression, the frozen figure, the edges outside the seal: that is all myth, Proust & Paracelsus simultaneously. (168)

The wax also evokes Descartes’ famous example of the mind imposing the order of ideas onto the shifting forms of wax. So Szentkuthy is very much not concerned with some unmediated sensory realm, but with a kind of mental processing of that realm that is post-cognitive but pre-intellectual. One that can be described in words, but is not the product of a schematic conceptual construction. (Here I think of Musil’s other condition.)

So connecting the wax with Proust’s conception of memory is incisive. But what of alchemist, mystic, and “scientist” Paracelsus? Paracelsus spoke of images of wax as prone to enchantment akin to Voodoo gris-gris,  even melting the image in order to destroy a foe. Szentkuthy is not an occultist: “There are two kinds of humbug in the world: the comic sterility of mysticism and the comic sterility of rationalism” (275). Rather, Szentkuthy wants to use Paracelsus as sort of a reverse analogy, reimposing the symbol of the loved one back to the original person. The loved one becomes their own gris-gris or tulpa or what-have-you. That is to say, when we are in love, the other person becomes the totem onto which we project our alchemical desires. That is how Szentkuthy, rather brilliantly, links Proust, Descartes, and Paracelsus.

Since my first sight of Albertine I had thought about her endlessly, I had carried on with what I called by her name an interminable inner dialogue in which I made her question and answer, think and act, and in the infinite series of imaginary Albertines who followed one after the other in my fancy hour by hour, the real Albertine, glimpsed on the beach, figured only at the head, just as the actress who “creates” a role, the star, appears, out of a long series of performances, in the first few alone. (917)

Marcel Proust, Within a Budding Grove (see my commentary)

So Szentkuthy wants to take such a theory of perception and emotion and cast it onto all of intellectual life. Casanova’s memoirs provides the raw material of a brilliant but worldly mind describing (and transforming) his life experiences without too much concerted intellectualism. Yet intellectual knowledge is still key. History and philosophy are not thrown out to make room for Romantic self-involvement, but participate in some kind of mental unity that constitutes Casanova’s substantial lived experience. When Szentkuthy speaks of Casanova’s time in Rome, he focuses on the immense history behind the city and the ruins of the empire:

Love needs muck, and this is muck: history perished on evidence and, above that, a flashy derivativeness, decadence consuming itself in poses. (121)

Recounting, in beautiful and somewhat Proustian prose, the landscape of the Boboli Gradens, he reasserts the necessity of the intellect:

An inflexible rationalism might say that, out of cowardice, I am simply tipping onto a sentimentality for Romantically vegetating landscape mawkishness: the greater prestige of a mask of ‘intellect’ and thus seeking alibis for my descriptive barrenness. Maybe; until his dying day a person will never know for sure whether his truths stemmed from pleasure in attacking or defensive necessity; most likely mutually.

Of course, I have to redefine ‘thought’ anew: a thought which seems relatively independent of self- and race-preservation causes a physiological stimulus, and that stimulus is always evoked either by an ‘absolute nuance,’ or by a fortuitous constellation of a thousand things, an aggregation of relationships which is unnameable from the outset but whips up passion in the brain. It is from here that my ‘barren’ mania of descriptions derives–I am always guided by a logical furor of discovery, an optimist despite its hopelessness. (132)

In intellectual matters it is the tyranny of ideological dogma that he rejects, finding that intellectual systems have only forced him into limited traps. He frees himself through examination of Tintoretto.

It was then that I learned there is not a shred of intellect in my life–everything is emotion, sentimentality, a tyranny of moods, but in such an inundation that any program of romanticism is Jansenist self-torture and rationalism by contrast.

Before Tintoretto I accepted that Pan sentimentality and declared it to be divine, and I promised that I would elevate it to the dignity of reason. (249)

So as Szentkuthy wanders through his descriptions, looking back like Orpheus and seeing them turn to dust, his voice merges with that of Casanova and it becomes difficult to tell whether one is reading 1939 or 1789, and history and books flood the pages. There is a visceral sense of being adrift in a strong currents of event and emotion, yet they always remain underspecified. Only landscapes are plumbed to particularities, all else remaining in the ethereal realm between mind and world. Yet it never collapses into word salad, because ideas and concepts and facts remain firmly in play, though always in flux.

I don’t feel that I’ve done a good job of describing the novel. I find it truly baffling. That it was written in that remote, difficult language Hungarian probably contributes. I cannot easily place Szentkuthy on my mental plane of authors; no single point seems to suit him. A few other authors have had this effect on me: Henry Green, R. A. Lafferty, perhaps Jean Toomer. But Szentkuthy seems to outdo them all. I’m grateful to translator Tim Wilkinson and Contra Mundum Press (who also reissued W. Jackson Bate’s excellent Negative Capability) for introducing me to something genuinely different.

Masks Behind Masks: A Portrait of Miklós Szentkuthy by András Nagy

Boudoir and Theology: An Introduction to Marginalia on Casanova by Zéno Bianu